Our neighborhood was built on what was an apple orchard; the beautiful farmhouse still stands at the bottom of the hill. And somehow, parallel to the Poltergeist story, my parents managed to build directly on top of a giant wolf spider nest. Look them up, they are nasty beasts as big as a tarantula. I’ll get to that later. My mother told the story of the first summer after we first moved into the house, it was late in the evening and all of the windows were open (no, there was no such thing as whole-house air conditioning, or room air-conditioning). They kept hearing scratching noises and could not figure out where the sound was coming from. Finally, they realized that the sound was on the screens, and found that all of the living room screens were covered in these giant spiders. I don’t mean “oh that’s a big spider at 2 inches,” I mean these were giant spiders at about 5 inches. Hundreds of them. No wonder my mother was always afraid of spiders.That all happened when I was only two years old—too young to know the difference.

Now I fast forward to when I was 10 or 11 years old and my dad told me to cut the grass. We didn’t have a shed or garage, but there was a small “room” under the back porch that led into the cellar. That is where we kept the gasoline for the mowers. I innocently went down the steps, opened the door, and reached down and lifted the gas can. Fast as can be, out ran this five-inch spider right at me. This thing was a monster, and I wanted none of it. Probably because I was screaming like my hair was on fire, my father and mother came running to my aid. Of course, when my mother saw the object of my terror, she wanted none of it either. My father, being a father, grabbed the old coal shovel we kept in the same little room. A coal shovel is a square, short-handled shovel designed, as you may have guessed, for shoveling coal. The blade of the shovel is about 20 inches by 20 inches and weighs a ton. My father scooped up that nightmare of an arachnid and tossed it into the grass, whereupon he began beating it with the shovel. As he lifted the shovel between each pounding, the evil creature would take off like somebody tapped it on the shoulder. This went on for probably three or four minutes until my father, not one to be intimidated by the toughness of the creature, threw it onto the brick sidewalk and gave it one last pound. That ended what I believe may have been the last life and perhaps the end of a species of spider. 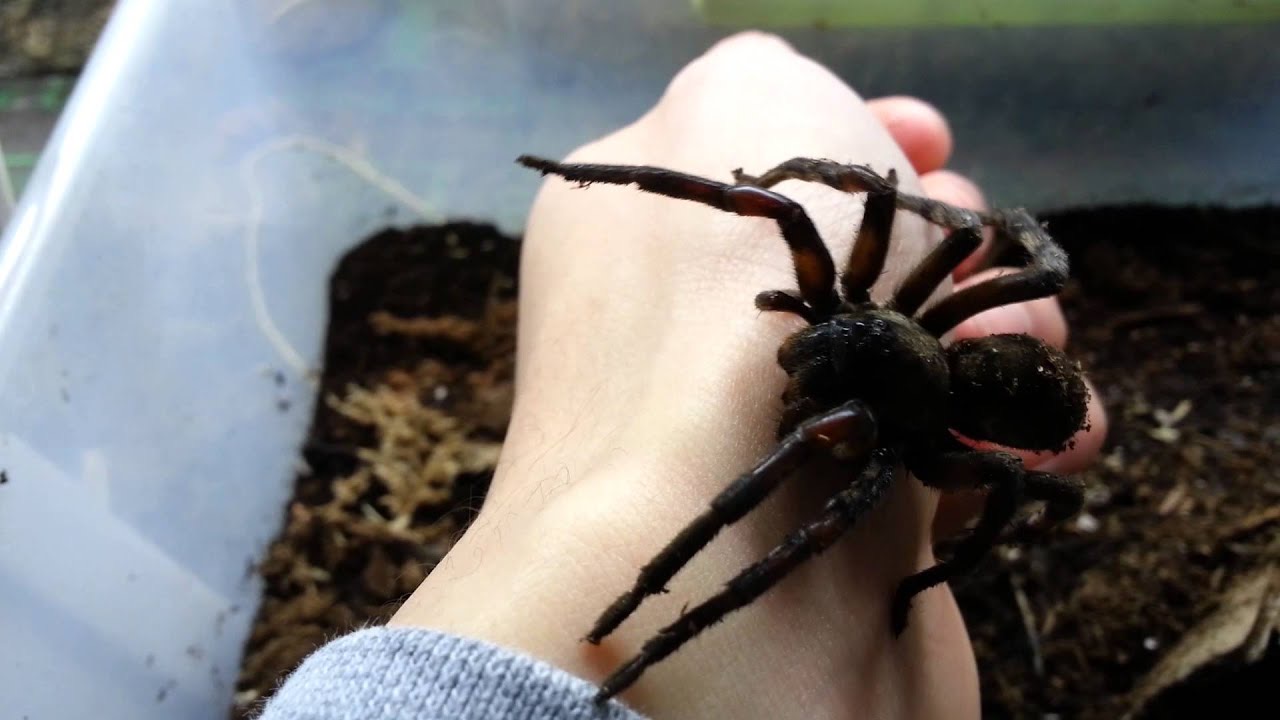 I went through about the next 30 years truly believing that we had discovered some sort of Eastern tarantula. I was so convinced that out of curiosity (and before the internet), I contacted a professor at the University of Arizona to ask about the spider, and how a tarantula had come to be in Pennsylvania. Helpful as all intellectually-superior professors tend to be, he mockingly told me that there have never been tarantulas in Pennsylvania. And that was the end of that conversation. It took me another 10 years before I found a site to which people could submit photos and have the site owner identify the spider. And there it was, plain as day, the giant wolf spider.

Because the land was newly developed, we tended to host quite a few nasty beasts. I can remember laying in the grass on my stomach when a little piece of earth lifted up and out came a large trapdoor spider. We also had a lot of black widow spiders hanging around all of the leftover lumber piles from home construction. In the hedges of the cemetery next door lived quite a variety of spiders and other various harmless critters. The thing was, the outside of the hedges presented a nearly impenetrable barrier, but the inside was practically hollow with the branches creating archways and vaulted ceilings. Remember, I was a kid, so the “vaulted” ceilings were really only a couple of feet high. But we had a fort that was not in view of any adult, and especially John, who you may remember liked to eat children. The hedges ran for a good 50 feet and provided endless fantastical stories. Now and then we had to wrangle a snake out of there, and I’m not sure why I wasn’t more scared of the copperheads (we knew full well they were venomous), but a good forked branch always did the job and none of us ever got bit.

The great thing was that most everybody moved in at almost the same time, and all the parents were about the same age. I swear they coordinated the timing of their kids’ births because every set of kids was around three years apart, and every set had enough kids to play with that we rarely had to jump age groups. Each age group had enough kids to play baseball (OK, not 18 kids at once). Remember, this was the end of the Baby Boom age. I rather like being a Boomer. It reminds me of ballistic missile submarines.